“just enough sugar to make it go down easy”

If it sounds country, then that's what it is, you know — its a country song. – Kris Kristofferson

Chuck Prophet -- "What Can A Mother Do?" 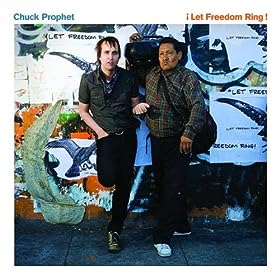 1. Chuck Prophet is not a country singer, doesn't claim to be. In fact, his new record, Let Freedom Ring!, is more of a tribute to the birth of rock and roll than anything, with its shades of Buddy Holly and Gene Vincent. However, it doesn't necessarily take a country singer to sing a country song, as he proves on the second track, "What Can A Mother Do?". Prophet has called these "political songs for non-political people", and his gentle treatment of loss here strikes a chord. This is not a song about people from the country, but a song for people from America's rural areas, which gives it all the qualification it needs.

2. Chuck recorded Let Freedom Ring! in Mexico City with Greg Leisz (who produced Dave Alvin's King of California) at the helm. He sought help from original E Street drummer Ernest "Boom" Carter and, on this song, ex-Nickel Creek fiddler Sara Watkins. Her lilting vocals and swooning fiddle give its shuffling rhythm a nice drawl. Prophet speaks of an "only child", who was "born to run" (pun intended, as drummer Carter gave that song its signature heft). "Unwanted in seventeen states", the child wanders around the country while Prophet wonders about her parents, whose baby is "never coming home". He moves on to tell the story of a youngest child, who scrapped for everything he could get growing up. By the time he enlisted, Prophet notes, he was "three times a dad". The chorus implies his death, and Prophet's subtle mention of his occupation makes clear his feelings on war.

3. Prophet finishes by noting the presence of "Jesus on the billboard" and how we have pounded our fists at the sky in vain, asking for some relief from this world. Finishing with the now loaded chorus, he shrugs his shoulders, and the song enjoys one last bit of music before fading away. This is not an overtly political song, as Chuck shows that the parents of runaways and fallen soldiers go through the same thing. Loss is one thing that makes us human, and this simple jaunt carries that simple message, with just enough sugar to make it go down eas